Thank you so much to everyone who came to the Round Up! And thank you to everyone who served and donated! This was our best year ever. For the first time ever, we had no overhead cost at all this year because of so many people donating and helping in various ways! We raised just over $4,000 and had about 300 people in attendance.

All of the participants who had come during the summer were able to ride their horse in one of our events to show off their skills to their family and friends. Our events this year were an obstacle course, red light green light, a pumpkin ring toss, and egg ‘n spoon. Everything went well and the kids had a lot of fun at their last hurrah of the season!

This year we were able to add carnival games which created more fun for the whole family. We also had a mini horse “garage sale” with used horse figurines, toys, and books for the families to purchase, which was really fun to have! Along with those new additions we had the regular silent auction (thanks to SO many donors), food (also generously made and donated), and more.

Thank you SO much to everyone who made this possible! Summer volunteers, volunteers for the event, and those of you who went out and got items for the Round Up. We are so appreciative and never could have done it without you! 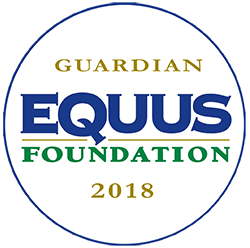 After many hours of work and research, we are very excited to announce that Haven Acres has received the Guardian Designation from the Equus Foundation!

The Equus Foundation says that “Guardians are organizations on the Equine Welfare Network that demonstrate a commitment to public transparency by their willingness to publish and share extensive data about their programs, horse care practices, and governance.” In order to qualify, we had to revise and write (many) policies, post emergency preparedness signage, and fill out pages of information on how we care for our horses.

We’re so thankful for this opportunity as it opens up doors for potential funding in the future!

We are still looking for 10-15 more solid, Christian men and women to volunteer for the summer at Haven Acres. A heart for God and a love for kids is a must. No horsemanship experience necessary. Commitment would involve weekly training in April and May as well as a 2-4 hour/week commitment one day a week in the summer and/or fall months. We need volunteers by April 9th as that is when training begins. For more info, please visit www.havenacresmn.org/get-involved

It’s been a tough week. Fix was injured a week ago, a puncture wound that apparently went all the way to the shoulder joint. We have no idea how it happened. We’ve checked the fenceline and everything in their paddock, and we cannot find a source for the injury. These things just happen sometimes.  After several days of antibiotics and pain medications and cleaning the wound, he was still not improving, so the vet came back out and performed an ultrasound. The ultrasound revealed that Fix had infection in the joint, and there wasn’t anything really to be done for it on the farm.  Taking him elsewhere for a procedure would have not only been extremely costly but also very painful for him to travel.  We allowed several more days for the antibiotics to work, but we didn’t see any improvement.

Yesterday we let Fix out of his stall to eat and stretch his legs, and he slowly wandered down to the gate of the paddock where he used to stay.  He started pushing on the gate with his nose, clearly letting us know that he wanted to go in and hang out with his friends.  Though it was very taxing for him to walk on three legs, he went out to graze with his buddies.  After a while, he laid down because he was in so much pain.  After several hours, he was still not getting up, so the vet instructed me to administer another dose of pain medication.  After 4 or 5 hours, he finally got up, but by that time the sun was not shining, and he was wet and shivering from laying in the snow. Although he was standing, he was in a great deal of pain to walk, and we had quite a ways to go to get back to the barn.  I haltered him and  urged him forward. He took several painful steps by sitting back on his haunches and hopping forward on his good leg. Then he stopped to rest. I patted his neck and face and encouraged him to take some more steps. I pulled on the lead rope gently at first and then with more and more force, but he would not move. The pain was too great. Tears began rolling down my face as I begged him to take a few more steps toward the warmth and comfort of the barn. Still no progress. He just couldn’t get up the strength to take another step.

Then something amazing happened. Solomon, a big bay 10 year old rescued race horse, came over to help. He sniffed Fix and realizing that there was a problem started to gently nudge Fix’s hind end with his nose. Fix came forward another couple of steps. We rested for a few minutes. As I started tugging on the lead rope again to no avail, Solomon reapplied light pressure from behind with his nose. This happened two or three more times, Solomon offering the support and encouragement needed until we were through the gate and up by the barn. We were able to get his blanket on him and give him a warm mash with apples and carrots and put him in his stall for the night.

I will always have a special appreciation in my heart for Solomon, for his persistent but gentle assistance. He demonstrated such love and concern when his friend was in need. I wonder if we do that for each other?

The incredibly difficult decision was made to have Fix put down. This morning Fix breathed his last breath. We cried with him and thanked him repeatedly for his amazing service to all of us at Haven Acres.  He knew he was dearly loved here, and he served out his days well, always with a willing, patient, and gentle spirit.  Many people were greatly impacted by him, and we will be forever thankful for the time we had him at Haven Acres. He will always live on in our hearts.