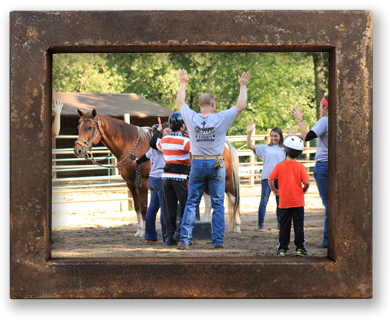 The founders of Haven Acres, Jason and Jenifer Heath, took in a teenage boy in 2002 that struggled with learning disabilities and mental health issues due to the abuse and neglect he had suffered as a child. The Heaths heard about a faith-based youth ranch in Oregon (Crystal Peaks Youth Ranch) that used horses to help bring healing to kids with these types of issues. When they searched for one nearby that could possibly assist the hurting teen they were raising, they were unable to find one in the area. The idea of someday running a similar ranch was conceived all those years ago and finally came to fruition in 2013.

Haven Acres started on a beautiful, wooded, 6-acre hobby farm in Burnsville, MN. With four horses, we saw 8 kids/ teens the first year. Growing rapidly each year, our 8 program horses were beginning to feel a bit overloaded, working with a total of 40 kids each week. It became very apparent that we would need to move to a larger property for the ministry and horses to thrive.

At the last second, but just on time, God provided a nearly 14-acre horse property in Hampton, MN, and we moved in on the coldest day of January 2017. This property not only has more land, but it also has a nice horse barn with a small indoor riding arena.

2020 was a year of miracles for Haven Acres! Blessed with an incredibly generous donation, we were able to build a much needed second barn. This barn is used to store hay and equipment, host volunteer meetings and events, and house an office for our staff.

Currently, over sixty participants attend mentorship sessions weekly in the summer. In addition, we have had the privilege of taking part in the adoption and/ or rescue of more than thirty horses, with seventeen of them currently partnering with us to offer hope at-risk youth. Lastly, we are excited about a couple of new partnerships we are developing within our community. Christian Family Solutions has an intensive outpatient treatment for teens, and Youth and Family Circle serves immigrant families in the Twin Cities.

Since its inception, Haven Acres has operated under the assumption that nothing significant can be accomplished through our power, but by God alone. Every provision we have needed, from finances to horses to volunteers to property set up, has been met and exceeded by our Heavenly Father. He deserves all the thanks and glory for everything that has been accomplished so far and all that is to come in the future!

Haven Acres exists to demonstrate God’s love by serving youth and their families through mentorship and rescuing animals.

Haven Acres offers a safe, country environment where hurting youth find hope, healing, and restoration through their interaction with horses and loving mentors that exhibit the transformational love of Jesus.

Our Statement of Faith

Though we are not associated with any particular denomination, we do hold tightly to the beliefs taught in the Holy Bible. We believe that there is only one God, and that He is sovereign over all. His Son, Jesus, came to the earth as a man, lived a sinless life, and took the punishment that we all deserve by dying on the cross for our sins. We believe that Jesus did not stay dead but rose from the grave on the third day and after walking and talking with his apostles for 40 days following His resurrection, He ascended back into heaven and is now sitting at the right hand of God the Father. We believe that Jesus is the only way a person can get to heaven and that by believing in Him and asking for forgiveness of our sins, we can be forgiven and live eternally with Him in heaven when our physical body dies. We believe in the Trinity, that God the Father, Jesus the Son, and the Holy Spirit are all parts of the ONE true God. We believe that the Holy Spirit has been sent to dwell in our hearts when we believe on Jesus and that He empowers us to live right, avoid sin and gives us boldness to share the love of God with others.

It is Haven Acres’ mission to serve youth and their families. Within those parameters, it is both our mission and practice to tolerate no discrimination in serving these families because of their race, color, religion (creed), age, national origin (ancestry), disability, sexual orientation, or military status.

Jason and Jenifer have been married since 1998 and have a total of 7 children, 3 girls and 4 boys. Jason works as a Financial Advisor for a large corporation and Jenifer worked as a Registered Nurse in Emergency Nursing for over 20 years, resigning from her position in 2015 in order to focus her time on being Haven Acres’ Executive Program Director. In 2012, the Heaths were blessed with a 6.5 acre homestead that was set up for horses, and shortly after, God laid it on their hearts to use their property to help hurting kids and teens. Since then they have relocated to Hampton, MN where they were able 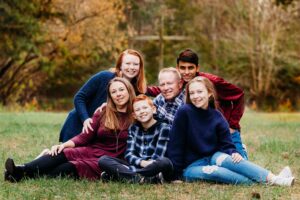 to expand the program through a property with more acreage and an indoor riding arena. They have served their local church in the area of marriage ministry and have helped to run the Junior Bible Quiz program there as well. They helped raise and manage the care of a young man with learning disabilities and mental health issues which has given them a special desire to assist others on that path to find hope and healing. In addition, in 2021 through a series of miraculous events, the Heaths were blessed to add another son, Alex, to their family through an international adoption from Colombia. 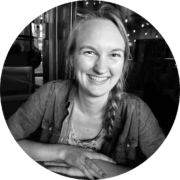 Holly Janik is a graduate from Moody Bible Institute with a Bachelors in Youth Ministry. She has been involved with Haven Acres since summer 2014, served as the intern in the summer and fall of 2016, and was a natural choice to add to the team as Assistant Program Director in 2017. She has always had a passion for God, a great concern for hurting people, and a love for horses. Holly was thrilled to find that Haven Acres is a ministry that has God at the center while using horses to offer healing and restoration. What a perfect fit!

Terry is married and has two wonderful daughters. He works in the IT industry and is employed by a large local health insurance company. Terry has been a member at a local church for 27 years. For the last 20 years he has volunteered with their Tech team, children’s ministry and one way café. Terry first started to volunteer at Haven Acres in the fall of 2013 doing chores and odd jobs. He moved to a maverick shortly after and has spent the last few years as a mentor. He also enjoys helping with chores year round. Besides Haven Acres, Terry’s interests and hobbies include spending time with family, volunteering with the local high school marching band and gymnastics team, and running.

Eddie has been working at a public utility company since 2003 and in 2012 became a Purchasing Specialist for them. He is married with two wonderful boys. One son works for a large zoo in south Texas, while the younger one continues to follow his passion for dance in Oklahoma. Eddie ran little camps for kids in Kansas who were physically challenged assisting them in having their own Special Olympics in the mid-70s. In addition, he has actively served in the children’s ministry at his local church since 2008. He enjoys being around kids because it makes him feel young.

Eddie has served on the Haven Acres Board of Directors since 2013 and has also served in a mentorship role since 2015. Eddie says, “I enjoy being a mentor and consider it an honor and privilege to serve at Haven Acres and see first-hand how God works through the horses to heal hurting kids. I think I get almost as much out of our sessions as some of the kids.”

Mike and Mary Lubinski, Board Members

Mike Lubinski has worked as an engineer for a Fortune 500 company since 1984 and has a keen mind for business and numbers. He and his wife, Mary, have been married since 1983 and have 3 adult children. Jay, one of their sons, unfortunately lost a courageous battle with brain cancer in 2013 at the age of 21, but that tragedy has only served to strengthen their faith and determination to help other kids and families who need extra support during difficult times. Serving as Children’s Pastor for a local church since 2008, Mary has a heart for kids and has a special gift for making them feel valued and loved.  Mike and Mary have chosen to serve on the Haven Acres Board of Directors as another avenue to invest in the youth of their community. 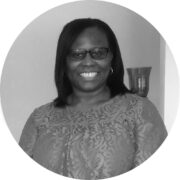 Evelyn Jones is a Human Resources/Business professional currently working as an independent HRIS/Payroll Consultant. She has 20+ years of experience working in Human Resources for corporate and non-profit organizations in the Twin Cities.  Evelyn has an MBA from Metropolitan State University and holds the designation of Senior Professional in Human Resources (SPHR) through HRCI (Human Resources Certification Institute).  She has been serving as a volunteer Board Director for Firefly Credit Union since 1998.

One of the most important facts about Evelyn is she holds dearly her relationship with Jesus Christ. Evelyn is a member of Celebration Church and serves on the Prayer Ministry Team and coaches Junior Bible Quiz (JBQ).  Prior to Celebration she had been a member of Shiloh Baptist Church in St. Paul for 15 years.  Evelyn held the role of Christian Education Director, taught Sunday School and worked with the Youth Department.  She has also served on the Women of the Word and Usher ministries.  Evelyn and Darnell have been married since 2004 and have one daughter. 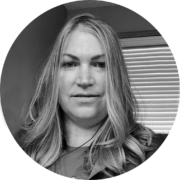 Jennifer George grew up with 1 sister and 2 brothers. They lived in Eagan, Minnesota and a couple came to their door and talked to her mother about Jesus, They started going to First Baptist Church of Rosemount where she came to know the Lord as her personal savior at the age of 5 and was baptized a year later. She has served at church in the nursery and pre-K. She currently attends Celebration Church and she is serving with the security team.

Jennifer has an AAS Degree in Accounting and started her career in Accounts Payable. A few years later she started working for US Bank Investments in their dividend and reorganization department where she remained for 7 years. From there she changed direction and started working with Business Personal Property Tax in 2007. She began to find herself laid off during the slow season and later found a job as a Tax Account. She currently manages Fixed Assets, Sales and Use Tax, Business Personal Property Tax, IFTA, FET Tax, 2290 filings. She has also been working alongside her manager to prepare some of the work papers used to file their S Corp returns and LLC partnerships.